"After a girl is grown, her little brothers - now her protectors - seem like big brothers."
- Astrid Alauda

So this is Part 2 of my short series about my brothers.


Having only two brothers, this will be a 2-part series. Makes sense I figure.

You can read Brotherly Love, Part 1: Matt first. Matt is my youngest brother.

Here, I will be talking about my other younger brother Paul.


I would like to start off with a direct message to Paul.

I know you have no idea what that means and that is because Paul and I have a few secret words that we use in our everyday conversations that were essentially made up a long time ago and mean whatever we want them to mean at the time and only we seem to know what the other is talking about.

Paul is two and a half year young than me.

He is not only a brother but a son, a husband, a father, an uncle, a Godfather (no, like Matt, he is also not a mobster that I know of!), a friend, a good cook, a metrosexual of sorts, a Chartered Accountant and much more.


I used to joke - a lot! - that Paul was the gayest straight person I know. I even shared my thoughts in a way-too-long speech at his wedding. The truth is - much of what has Paul in touch with his feminine side is what I see as his best qualities and I am guessing make him a pretty damned good husband.


Growing up, Paul and I had more of the classic brother-sister, love-hate relationship thing going on. With Matt - who is 8 years my junior, I acted more like a little mother to him. With Paul, I was pretty much the know-it-all, annoying big sister and he was the annoying little brother.


Paul always did well in school - as did I - and was kind of the "Alex P. Keaton" over-achiever type. He was involved in many sports, many activities and had many friends. He was even voted Valedictorian of his high school class. No surprise there.

Paul is married to a lovely woman named Vicky (yes, you made my blog again girl!), and they have two adorable kids - my nephew Rowan and my niece Maeve.


With Paul being a busy Financial Director and Vicky being a busy Doctor, they have a lot going on, but they seem to make it all work. They are also one of the best frickin' good looking families I have ever seen which makes me want to puke but instead I will just be happy for them. Except for Vicky's skinniness. I hate her for that. Just kidding. Sort of.


Now you may think that since Paul is an accountant that he is not a creative type like Matt and I. This is is not true. While Matt and I certainly need to express ourselves creatively more than Paul, Paul is actually quite crafty.

Paul is a really good cook and I really wish he would dump the numbers job and open a cool restaurant and then I could take my family there every day and eat for free. I realize this is a pipe dream, but just in case he ever goes ahead with my dream, I'm just putting it out there that this is what I would expect.

Or perhaps Paul could open a gym since he is really into health and fitness. And he can even play hockey too. He must be related to me somehow! Anyways...then he could give me a lifetime membership...and memberships to my boys so they can train hard and become NHL stars...and also be my personal trainer.

Some ideas for you Paul:


Anyways....of course I digress.
One thing that really stands out about Paul is his generous spirit.

He is incredibly giving, kind and caring. If Paul is your friend, you have a good friend indeed.

If Paul is your brother...well...that is even better.


He is always sending me little encouraging messages, be it in a greeting card or on facebook or via e-mail or on the phone. He knows I tend to doubt myself a lot and he encourages me and supports me in these little ways and it really lifts me up. He supports my new writing endeavours and also talks to me about health and fitness. I cherish him for these things. 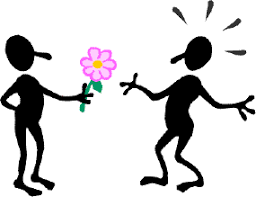 Paul is also a bit of a control freak which sometimes drives me bonkers. He likes things to be "just so", and if they are not he gets a little frazzled. I think he is really just so concerned that everyone is happy in any given situation that he worries too much sometimes. I can be like this too. It is one of those qualities that requires balance and I think he is doing pretty good.

In short, Paul is an amazing person who I am proud to call my brother.

I will just say one more thing:


Translation - for everyone other than Paul: I love ya bro!
Smiles,
Lora