Wellx Article #29: On The Power of Colour

As per usual, I will begin by pointing you in the direction of my first twenty-eight articles published by Wellx here.

Today, my piece talks about colour - and how everyone has ones that suit them...either in their closet or in their home decor.

Colours - like people - have personalities all their own...and sometimes when they meet...it is a match made in heaven. I am so happy to continue to work with WellnessX and share my thoughts with you and wellness professionals around the world.

Thanks as always to Brad and Mel and everyone at WellnessX for continuing to share my work and for their on-going support and great work with the wellness community!

Lora
Posted by Lora Rossi at 09:05 No comments:

To read my past articles for RBW, please click here.

This new piece take a closer look at my crazy life as a Canadian, hockey mom.

I first wrote about this topic in my first article published by What's Up Magazine entitled Confessions of a Hockey Mom.

I was a little newer to the lifestyle back then, and since...well...things have gotten quite a bit crazier (...and only two of my three sons play. Has it only just begun?!?)

So here is the link: 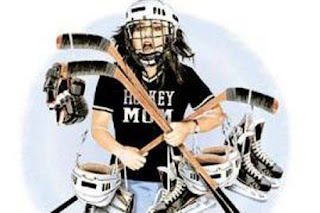 As always, thanks to Tara, Renee and the entire RBW family for continuing to publish my work and for their on-going support and wonderful website!

"You can have anything you want if you want it desperately enough. You must want it with an inner exuberance that erupts through the skin and joins the energy that created the world."
- Sheilah Graham

It's one thing to want something.

It's quite another to go and get it.

You say you want that job or that guy or that body or that villa in the South of France.

If there is something you desperately want in this life...something that you want so badly that not a day goes by without your thoughts turning towards it in some way...stop long enough to figure out not what it is that you want - you already know that...but figure out what you are DOING to get yourself closer to it.

As I said, wanting is very different than actively doing.

Talking the talk is simple.

Walking the walk is something else all together.

And I do a lot of talking.

But sometimes the pace is too slow and then I stop because I get tired or I get distracted or my shoelace comes untied or my phone rings and God forbid I try to walk AND talk at the same time!

And then...between the chitter chatter...the words turning into sentences...that seem to make sense at the time but in hindsight only took up space...the space between your head and your heart.

Your head telling you that you want it...you want it bad...but it is too hard...you don't deserve it enough...you will never make it...so why even bother really trying?

You heart pounding in between - drowned out by the words but beating still...boom boom.

The drum beats as steadily as that feeling you have...that one that visits you daily...the one that stops the noise as quickly as the noise then hushes it out.

But beyond and above the sounds you still feel it.

Until the boom becomes a bang...a CRASH!

And the crash! bang! boom! is all you hear.

It is all you feel.

Until it is quiet.

You are exactly where you were meant to be.

You have what you want.

Did that make any sense at all?

If not...just listen to your heart. I am not a big fan of moustaches.

I don't mind them if they are married with other forms of facial hair...like a nice goatee or on some, a well-groomed beard.

But the stand-alone 'stache kinda screams a few things to me:

1. I am an American cop (not that there is anything wrong with that. Love American cops!)

3. I am a hockey player in the playoffs (not that there is anything wrong with that. Love hockey players...eh!)

4. I think I look like Magnum P.I. and I am as cool as him too (not that there is anything wrong with that. Love Magnum P.I. Right up there with American cops!)


Now there are a few people of note who are allowed - by me - to sport a moustache year-round:

1. Tom Selleck. He trademarked that thing and when he does not have one, he looks like part of his face is missing.


2. Wendell Clark. And he even has the handle-bars going on. But how am I...or who is ANYONE for that matter, to tell the great, Canadian, hockey legend Wendell whether or not he should shave?

Now if you don't know who Wendell Clarke is...first of all...shame on you! But you are probably not Canadian...or at least not interested in hockey...so I'll forgive you.

But trust me. You DON'T want to tell Wendell what do do. If you don't believe me, just YouTube some of his best (or worst...depending on how you look at it!) hockey fights and then you'll understand.
Want a few examples? Here you go!


3. Freddie Mercury. OK...the dude is no longer alive, I realize. But as one of the greatest voices in music...not to mention an icon...his moustache just fit him.

4. Charlie Chaplain. Do I really need to explain? Didn't think so. 8. The Swedish Chef and the two grumpy, old dudes in the opera box on The Muppets. In fact, any muppet. They are muppets for God's sake! And that makes them eternally awesome!

9. Salvador Dali. Because is was a genius.

10. Albert Einstein. Another genius. Who am I to argue?


OK...there are others. Like Hitler...who may have had a famous moustache but does not make my list because he was one of the most evil people ever to walk the earth. (I wish Chuck Liddell could go back in a time machine and met up with him in a dark alley way. Enough said.)

But on to what the post is really all about. Yes...I digress.

What is Movember you ask?

Movember is the only month whereby men of all walks of life...from the straight-laced accountants to the butcher, the baker and the candle-stick maker.

Now I happen to know a pretty straight-laced accountant myself. His name is Paul and he is one of my younger brothers. I talked all about him here if ya wanna get to know him better.

Paul is usually pretty clean-shaven because that is his look and because...well...he is a Chartered Accountant and needs to look all professional and corporate and all that. Also...his facial hair growth is pretty slow moving...so that could also be a reason.

Anyhoo...Paul has jumped into the Movember spirit with guns-a-blazin' (did I just say that?) - and I must say, I am proud of his efforts thus far.

Here are a few progress pics:


And that is all he has sent me thus far.

But good on ya bro!

Here - in Paul's words - is his motivation behind getting his Mo-jo on:


"Awesome cause to raise awareness for Prostate Cancer and Men's mental health issues...and of course, it's a great excuse to get "permission" at home to grow a wicked Mo!"

If you want to join in the action, please visit Paul's Movember Page here and leave a word of encouragement, make fun of him (just kidding...sort of!) or make a donation!

Men's heath issues are important to recognize and are sometimes over-shadowed by (equally important) health issues related to women.

So "Yo!" to my bro for getting in the know...and growing his Mo!

"Comfort was allowed to come to them rare, welcome, unsought: a gift like joy."
- Ursula K. LeGuin

And his name is Drew.

A LOT of hockey.

Especially Julian as he plays at the "AA" level - which is competitive or "rep" hockey. He plays for The Mississauga Braves.

We spend a great deal of time at hockey rinks.

A while back, I told you all about Drew and his "creature comfort" (and I mentioned the creature comforts of my other boys as well - which they will be mortified about...especially Julian because he is cool now you see...so if you are reading this and go back and read that...please don't mention it. Especially to his teammates! Thank you.)

Anyhoo...about a week ago, I was at a hockey rink in Toronto watching Julian play an evening hockey game.

All seemed well in the world...


...until I got a call from my husband that went something like this:

"Do you know where Bear is?"

"Yeah...I have looked everywhere. Drew won't go down to bed. He is freaking out. This is an official 'Amber Alert' on Bear."


"Ohhhhhhhhhhhhh shit! Uhhhhh.....yeah. I just remembered. Drew we freaking out before going to pre-school and didn't want to let go of Bear so I let him bring him in the car...and...uhhhhhh...I think he is still there."

"Frick. Yeah. In my car. Here at the rink. Maybe he can sleep with Monkey."

Uh-oh. This was not a good situation.

You see, Bear is Drew's very, very, very best friend. And stupidly - we only have one of him. They no longer sell the little bugger at IKEA and we were dumb enough to give him Bear - who he latched on to very quickly - without having back-up.

Now, when Drew returns home from anywhere (we TRY not to let Bear leave the house for fear of losing him), inevitably, the first words out of his mouth are "Oh Baaaaaa-ooooo! Way aaaaaaaaaaaa yooouuuuu!"

This goes on until his best friend is snuggled in his chubby little arms.

And so...about ten minutes later, I get another call from my husband. I can hear Drew wailing in the background.

"I'm coming out there. I'm driving to the rink to get Bear."

"You are gonna drive all the way out here just to get him?"

"Yeah. Can you go and make SURE you have him before I do that?"

So I run out or the rink to the parking lot, open my car door, and sure enough...there sits little Bear.

"Yeah...he's here. I'll bring him in with me and just call me when you get here and I will run him out to you. Again, I am really sorry."

I decided to make the best of the situation.


Bear is an important member of the Rossi family, so I thought it was only fitting that I take this opportunity to introduce him to hockey.

And so as he waited to be reunited with his BFF...Bear enjoyed his very first hockey game.

And then I got the call that Bear's loyal companion Drew was awaiting him in my husband's truck outside. Bear was having a really great time...and on-lookers were staring at me taking these pictures...me and this little, raggedy, old stuffed animal...as though I was several steps short of a ladder...but that's fine. I don't really care about looking like a fool.

But he had an adventure...and one day, Drew will see this and hopefully forgive me.