Words When There Are None

I didn't plan for this to be my first post of the new year...but often things happen in life that we don't plan on.

The events at a small elementary school in Connecticut on Friday, December 14, 2012 horrified me - as they did you as well I'm sure.

I am rarely at a loss for words, but on that day...I was.

I couldn't even think about putting pen to paper (or fingers to keyboard as it were).

I was glued to the TV, watching the tragic news of the day unfold with tears running down my face.

I start writing this post on Sunday, December 16. I probably won't finish it today - but my rage about this situation is bubbling and so...here I am at my laptop.

Last Friday evening I had to pull it together to drive my oldest son Julian to his hockey game in Vaughan. I fairly long haul in rush hour traffic.

Nothing terribly new about that...but as Julian sat beside me playing a game on my iPod, I was listening to my new Soundgarden CD and my thoughts turned to the parents of the children they would not be driving to hockey...or ballet...or to get their picture taken with Santa...or anywhere that evening.

Before I left, I picked up Julian along with my middle son Noah after their day at school. Their day was  normal. It was safe. They learned their math lessons and played outside at recess. No one broke in to their school and opened fire with a gun. 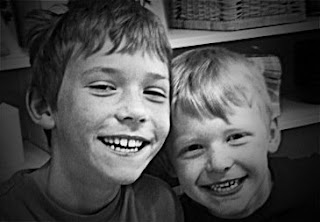 When we got home, I knew that they were old enough that they would inevitably find out that in another school, things had been very different that day.

But how does one explain this type of real-life horror to children without scaring the crap out of them?

This could not be explained away as "make-believe". This was not an "only in your head", monster under the bed. They caught me watching the news and of course it was everywhere.

"What happened Mama?", they enquired.

"A very bad thing happened in a school in the United States. A man who was very, very sick broke into the school and shot people with a gun and a lot of innocent people were killed."

I sat with him and listened intently.

"We were just in the USA Mama. We were in Chicago. How far is Chicago from Connecticut?" I sensed he wanted to know how far...or more accurately...on close we had been to "danger".

I told him that the man who did this unthinkable thing was dead. He could no longer kill anybody. He could not get in a car or a plane or a train or walk to...anywhere.

Of course...then he started to ask "Why?"

I explained to him that this man's brain had been very sick. He did not get the help he needed and he ended up doing these very bad things.

After taking this all in, Noah said to me "I bet you are glad I was not at that school Mama."

In that moment, I wished Buzz Lightyear - who coined that phrase - and all other Superheros were real.

Perhaps they could have saved the day.

I then told him I was just very sad for the children who were at that school and for their families.

Then came the questions about guns.

Noah knows that I can't stand guns...even the "play" kind and I insist that he or his brother never point anything at me pretending it is a gun. "But it is just Nerf Mama" they sometimes used to say. Now if they do it, they just say "Oh yeah...sorry Mama."

I explained to Noah that gun laws are very different in the US than they are here in Canada...and that for us, that is a good thing. I also told him that I hoped the gun laws in the US would change very soon because things like this school shooting should not happen. He agreed with me. He also said he was glad he lived in Canada.

"Me too my love" I said. And with another squeeze and a kiss, Noah was off.

Julian...a little older...much more introspective...and very smart, didn't say much. He is the type of child that needs to take stuff in and think about it for a while. I asked him if he had questions and he said "no".

This is a boy that, despite my efforts to keep them away, now plays a few "war" video games that involve guns. I still hate them...but all of his friends were playing and I was starting to feel like I was losing a battle that would just keep on getting bigger (no pun intended - or was it?).

This is a boy who loves Nerf guns. But this is also a boy, who, when asked to pen a slogan for a Remembrance Day poster he made at school wrote, "War is not a video game." When I saw that, I felt we as parents had somehow, maybe...just maybe... successfully found a balance between "letting boys be boys" and sheltering them from everything - and everything their friends were doing.

We have never just "let them" do things that we (mostly me!) question. I have never been a boy...but my husband has and he recounts the hours of fun he had playing "cops and robbers" and "cowboys and Indians" (politically incorrect...but that is what they called it!) - and that he is an upstanding member of society.

But back to the subject at hand.

Julian was pretty quiet and I didn't push. He needed to absorb...much like I did.

I left it at that. For the moment.

Back to the car ride to his hockey game.

I was holding back tears at one point and would occasionally grab Julian's leg and give it a little squeeze. Instead of the "Mom...stop it!", I got nothing. After about the third time I did that, he looked over at me and gave me a reassuring smile - as if to say "It's OK Mom. I know you are feeling sad."

When we returned home - after a much shorter drive - we got out of the car. I opened the trunk as per usual so that Julian could grab his hockey bag and stick and then went to the front door to unlock it.

Out of nowhere, Julian called out to me.

"I love you too sweet pea."

He slammed the trunk door a little too hard and that was OK.

He walked over to me and I opened the house door. He put down his hockey stuff with a sigh and I gave him a kiss on his forehead.

He smiled that knowing smile again.

It was a moment of gratitude and of grief all at once.

Perspective was mine then...and I thanked God for my blessings.

And that night I prayed for those whose lives have been shattered.

Shattered...because things have to be done to change the way mental health issues and gun laws are viewed in other parts of the world.

Parts of the world that are close to home.

Close to all of us.

And instead of smiles...today I sign off simply with...