Do you ever experience so many deja-vus in your life that you feel as if you are living in the movie "Groundhog Day"? 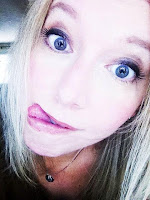 Get up. Stretch you aching back. Rub your eyes. Saunter to the bathroom. Jump in the shower if you have time. If not, pull your hair back. Put on a bit of make-up so that you look half-presentable.

Get baby out of crib. Change poopie diaper. Yell across the house to remind your older kids that they had better be eating their cereal because they are old enough to get themselves their cereal and pour milk on it.

Dress baby. Wish he was old enough to get his own breakfast. Realize he is not and give him a break. Make him breakfast.

Clean up that very breakfast because in a fit of rage he decided he does not want what you made him for breakfast and threw it on the floor.

Clean up the floor and eat some of it as you go for your own breakfast.

Boys pass you in the kitchen and you kiss them good morning and tell them to listen to you. They turn to go upstairs and you say "Pardon?" and they say "Sorry mom".

Make something different for baby. If he eats it, good. If he throws it on the floor again, too bad for him...more food from the floor for you.

One asks where his belt is. You tell him "probably in the hamper and you should remember to take off your belts before you put your jeans in the wash"...again.

One comes down wearing jeans with big holes in the knees. You say "How many times do I have to tell you that those jeans are for playing...you don't wear them to school?!?'


He sighs and goes upstairs to change while the other one is sighing because he still can't locate his belt in the hamper.

You put the soaked shirts in the hamper and find your older son's lost belt.

You also find a perfectly clean pair of new jeans in the hamper that you knew were dumped there because your other son was too lazy to put them away.

You give them to him and say "Stop putting clean clothes in the hamper...now take those ratty ones off and put these perfectly clean ones on." He complains because they were in the "dirty clothes" and you remind him that most of them are clean clothes that he and his brother threw in there anyways.

Except for the shirts soaked in milk.

But you keep that detail to yourself.

You spout four-letter words to yourself - or perhaps out loud - because you failed to put the coffee on and frick...you really need a jolt of java!

You rush to put the coffee on only to realize you are out of coffee and now you don't have time to stop at Tim Horton's on the way to work.


You get the lunches out of the fridge and you silently thank your husband for making them the night before but also spout more four-letter words at him for having to leave so early for work each morning that he can't help you deal with all this shit.

You realize you don't have socks on so you run up and can't find any that match so you take some out of your son's drawer and give thanks that their feet are now as big as yours.

You tell the boys to turn off the TV, the video game, the whatever and then send them back to turn off the lights. Then they argue as to who left them on and you tell them you don't care...just somebody do it. And clear your breakfast dishes while you are at it.

And put them in the dishwasher because you may be their mother but you are not their maid.

Tell older boys to put their lunches in their backpacks and then one of them tells you he needs $12 and a 4-page form filled out for a field trip and it was due yesterday. You tell him he needs to tell you about these things earlier and quickly fill out the form and search for cash around the house until you finally write a cheque for $12 because who carries cash anymore...really!!?!?

Ask the older boys if they brushed their teeth and get little smiles that mean "no I forgot" and at this point you don't care...there is no time for personal hygiene...you just want to get out the frickin' door.

You tell them their teeth are gonna fall out and that they will never get dates when they are older and they tell you that girls are gross anyways.

You get baby into his jacket, hat, scarf, boots and then he throws a tantrum because he hates mittens. You tell him his hands are going to be cold and he does not seem to care and neither do you.

You tell the boys to get on their outdoor shit and one of them complains that his socks are uncomfortable under his boots and you tell him too bad we are late. He starts to whimper and you ask him if he would like cheese with his whine.

He grumbles and groans as if he is having a major health crisis and you run upstairs and throw down - a little too hard - another pair of socks that are exactly like the ones he is wearing but whatever.

Finally everyone is out the door. 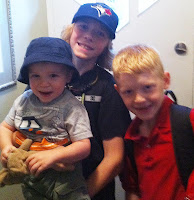 Except one of the boys forgot his backpack and you have already started the car.

You take the keys out of the ignition so that he can take the keys, unlock the house and get his bag and then you yell to him to remember to lock the door.

Then everyone is in the car.

At least you don't have to do this again until tomorrow.

Like you said...as do I...they are lucky they are cute. 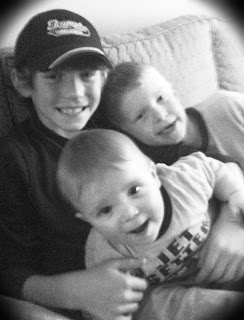