HuffPost Live with Ty Pennington & Me!


So a couple of months ago, out of the blue, I was contacted by The Huffington Post - one of the biggest news websites in the world.

A producer of the site's popular, on-line show HuffPost Live contacted me because she read my blog and thought I would be a good segment guest for a show they were doing.

So that I am not repeating myself, the details about that...along with a link to the segment is here. 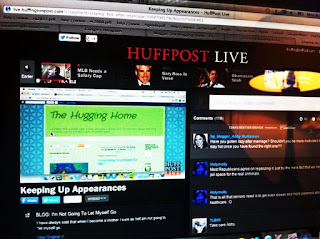 I was contacted again - this time by phone - by another HuffPost Live producer asking me to participate in a segment with SELF magazine about spring fitness. Unfortunately, I was unable to fit that one into my schedule.


Then a few days later, I got another message from yet another HuffPost producer asking is I would be a segment guest on a show with well-known interior designer and TV personality Ty Pennington!


Now this was exciting!


Not only am I am big home decor junkie, but I am a big fan of Ty's - both because he a cutie pie and because I really like his design aesthetic.


Luckily, I was available to do the segment.

Now those of you who are familiar with Ty know that this guy is majorly hyper and talks and moves a million miles a minute (he actually has spoken openly and honestly about living with ADHD).

This being said, he did most of the talking during the segment and my contribution included a couple of questions near the end. If you blink you just may miss me!

But it was still cool and fun to be a part of it!

So here is the link!

Special thanks to Vanessa and Camille at The Huffington Post / HuffPost Live for asking me to be a part of this fun experience!

I hope to do it again soon!